At the McDade-Cara School, we are dedicated to preserving and enhancing the rich tradition of Irish step and figure dancing.  Above all, it is our hope to provide an atmosphere where girls and boys can have fun and build relationships that will last a lifetime. 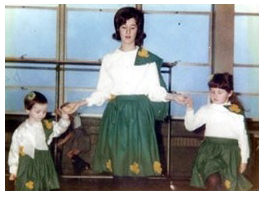 Where It All Began

The late Maureen McDade McGrory founded the McDade School of Irish Dance in 1962. Maureen began step dancing as a teenager. Her father, Jimmy McDade, was the leader of “The All-Ireland Orchestra,” which played at most of the main Irish events in the Philadelphia area, and Maureen often tagged along with her father to listen to the band and watch the dancing. Though a native-born American, Maureen became fascinated with the dancing and begged her parents for lessons. Her request was granted, and she began studying with the late Sean Lavery, who was one of the leading dancers and teachers in the Philadelphia area. After the death of Sean, Maureen decided to begin a school of her own and children began coming to her home for lessons. Maureen continued to teach over the next three decades in the Philadelphia area, training many champion dancers. She truly loved the art of Irish Dance.

“We firmly believe that instruction in step dancing develops the overall physical abilities of our children and strengthens their self-esteem as they master the progression of dance steps.”

We offer a variety of classes for children as young as 3 through adults, providing everyone the opportunity to love Irish Dance.

Would you like Irish dancers to perform at your special event, wedding or corporate function? We love sharing our dancers with you.

Every year, our McDade Cara dancers earn top recognition in local, regional, national and world champion level competitions. We are humbled and honored to teach such amazing children and adults.